Why there are no penguins in the Arctic 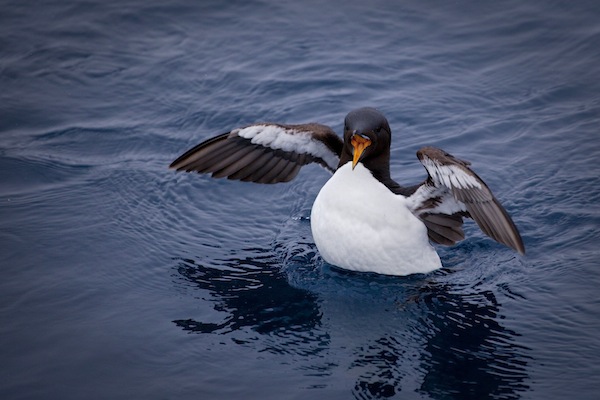 Br√ºnnich’s Guillemot, Uria lomvia, with an open beak and flapping wings, in the Arctic Ocean, north of Svalbard

So, penguins live in the south, and polar bears in the north – never the twain will meet, despite the best efforts of toymakers and cartoons. But was there ever penguins in the Arctic? Dave investigates.

Throughout the Esperanza’s journey around the coast of Svalbard, we’ve been kept company by several species of alcid – the auks and the guillemots. There are the cute little auks, the clownish puffins and the garrulous black guillemots, with their chatty red beaks and red feet.

There’s the more sociable Brünnich’s guillemots, that seem to form well-organized welcoming delegations wherever we stop the ship off the north coast, providing the crew with great entertainment – especially in how they seem to use their feet as airbrakes when “cornering”. The chattier black guillemots get the most laughs – Captain Joe, Erik and I watched three of them standing on a piece of ice, where they got into such a heated argument that they all lost their balance, and off into the water with a splash. Several crewmembers have noted that the guillemots and auks remind them of penguins. Maybe so, but the major difference is that all the birds around here can actually fly, unlike penguins. True, the auks and guillemots may not the most efficient looking in the air, but evolution has granted them a compromise; they can also “fly” under water, and dive to depths of tens of metres. It’ an impressive thing to witness the white wing flashes of a black guillemot torpedoing along under the ocean’s surface.

But these auks and guillemots are definitely not penguins: after all, there are no penguins in the Arctic. Or is there? Someone told me that there was a misguided and failed attempt to introduce penguins to the island of Lofoten, of the Norwegian mainland, but that doesn’t count. What about those cheesy greeting cards showing penguins trying to wake up polar bears with crashing cymbals (a colleague, Sara, has this card on her desk in Amsterdam)? If it were true, it probably would make poor evolutionary sense for a penguin to do such as thing anywhere near a hungry bear.

Up or Down?
To be honest, it’s pretty easy get confused about the whole penguin issue, and other polar facts. Sometimes, when I tell people that I’m off to the Arctic, I see a vague uneasy look in their eye. There’s a pause before they ask shly:

“Is that the one at the top or the bottom? Does it have polar bears?”

On other occasions, I get a more cheery, confident “say hello to the penguins for me!”

I don’t have the heart to tell them that not only is there no polar bears in Antarctica, there are most definitely no penguins in the Arctic. Despite cartoons and popular images, never the twain will meet. Which is lucky for the penguins, and means the polar have to stick mostly to unlucky seals.

Now that we’ve got this little fact straight, and before I start contradicting myself, let’s settle a few other issues; the Arctic is most definitely in the north; the Antarctic is in without doubt in the south. The ancient Greeks named the Arctic after the constellation Arkitikos, the Great Bear; the Antarctic is the opposite of the Arctic.

The North Pole itself is actually in the middle of the ocean; but there is no “pole” at the North Pole – and even if you put one there, it wouldn’t stay for long, before drifting off with the piece of sea ice it’s attached to. There is a pole at the South Pole, a rather questionable stripy pole with a silver ball attached.

Yes We Have No Penguins Today
But there are still no penguins in the Arctic. Got that?

I thought I had got it, until earlier this year, when this “fact” came up in conversation with a French friend of mine, Marie-Catherine. I explained the whole polar bear vs. penguin confusion, but she took issue with my claims and promised research. The next day, I receive an email from her confirming her suspicions. In French, the word manchot is used to describe the penguins we know and love in Antarctica. However, the word pingouin is used to describe guillemots and auks of the northern hemisphere; for instance, the ‘petit pingouin’, is the Razorbill, Alca torda.

I did a bit more reading, and found that the true northern ‘penguin’ was the now-extinct and flightless Great Auk; its Latin name Pinguinis impennis says it all. Unlike the smaller auks and guillemots that have been keeping us company this summer, the Great Auk didn’t live in the Arctic – it didn’t really stray farther north than Iceland and could be found from Newfoundland and Greenland to Scotland.

The Great Auk
The Great Auk liked to sit up straight, was an impressive 80cm tall, and could fly through the water gracefully; but it was a poor walker and unable to fly at all, making it easy prey for hunters and hungry sailors. The last authenticated kill of a great auk was in June 1844 in Iceland, ironically the result of a hunt for to supply a dealer in rare birds and eggs.

Its closest surviving relative is the razorbill, the ‘petit pingouin’ that Marie-Catherine talked about. There are a few razorbills hanging around Svalbard, but not many venture this far north, most of them living farther south in the North Atlantic.

So why is this extinct bird called a penguin? There are various theories on how the word ‘penguin’ came out. One line of thought suggests it comes from ‘pingwen’ a Welsh word, with ‘pen’ meaning ‘head’ and ‘gywn’ meaning white, referring to the white patch beside the great auk’s eyes. However it started, it seems clear that the great auk was the first bird to be called a ‘penguin’.

Or perhaps it was later, as explorers and sealers and whalers started visiting the subantarctic islands, where they found the breeding colonies of king penguins and other smaller Antarctic species. I think it most likely that the big king penguins, standing upright, flightless and comical, reminded them of the pingwens north of the Equator.

The rest is history. The first true penguin vanished into oblivion, thanks to human predation. Today, everyone knows what a penguin looks like (even if they don’t know where they live, but few people have ever heard of the great auk.

And that is why, ladies and gentlemen, there are no penguins in the Arctic. Unless, of course, you count the millions of little auks, black guillemots, Brünnich’s guillemots, razorbills, common guillemots and puffins.

First published by Greenpeace International, July 2010 and later on davewalshphoto.com