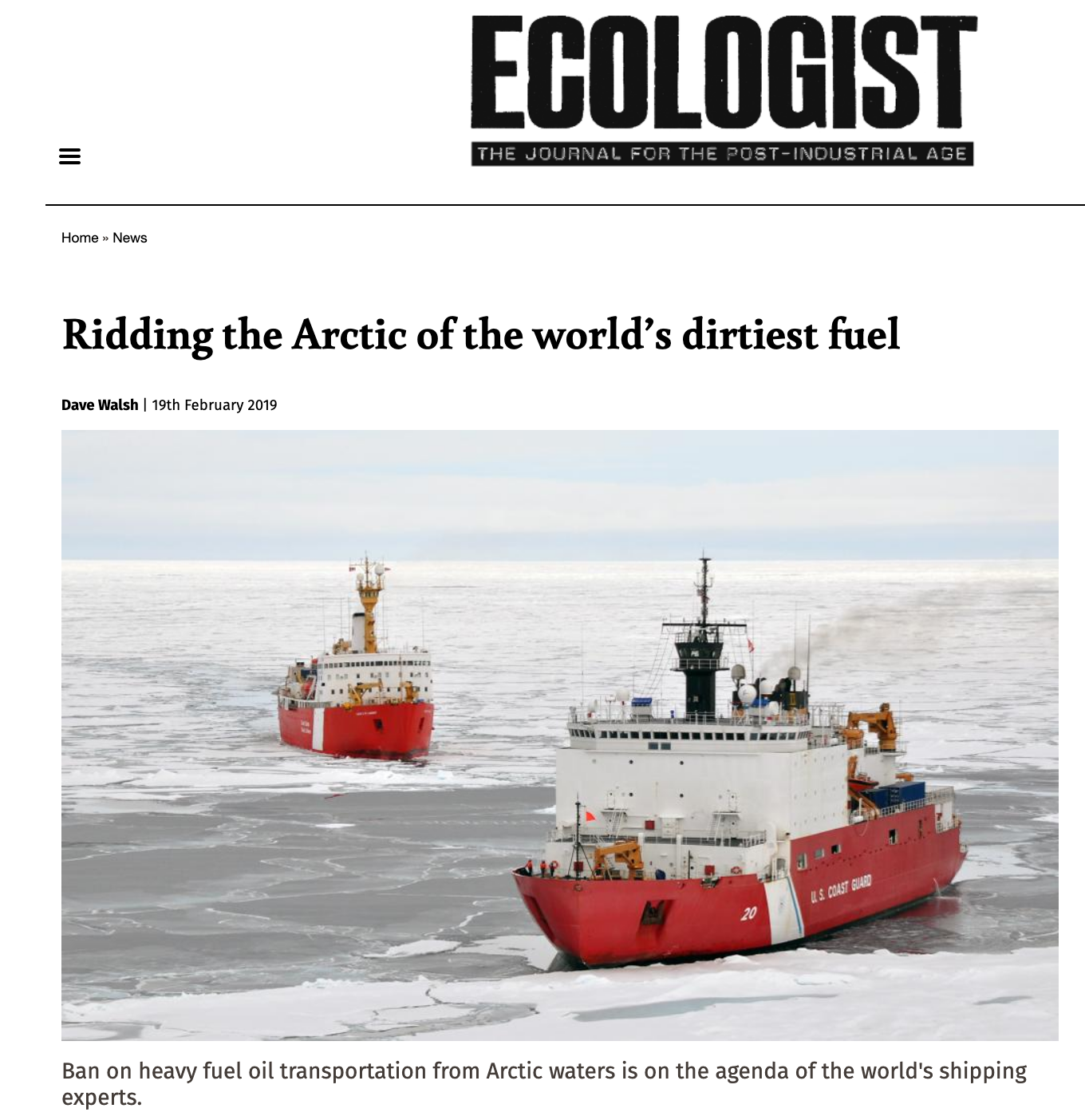 Many member states of the IMO – the UN body that regulates shipping – already voiced clear support for the ban at the IMO in April 2018.

Finland, Iceland, Sweden, Norway and the United States, along with Germany, the Netherlands and New Zealand, proposed the ban on the use and carriage as fuel of HFO by ships operating in the Arctic, as the simplest approach to reducing the risks associated with HFO.

These progressive stances are being met with some leaps of faith and innovation from some leading shipping players. This is notable for an industry that traditionally tends to move at a near glacial pace, and happy to stay quiet during international climate negotiations.

A clearer picture is emerging – of the climate impacts from global shipping, the health risks to cruise ship passengers and crews from fossil fuel pollution, and the dodges used by the cruise industry to get away with dirty practices.

It seems impossible to “get away from it all”, when the air on board your ship is filthier than the world’s most polluted cities. And the polluters won’t get away with it for much longer.

The shipping sector is changing – it has gone the tentative floating of zero emission concepts, to full speed ahead, with some commentators referring to a “gold rush” mentality in the quest for cleaner shipping fuels.

Perhaps shipping industry leaders are finally taking inspiration from Lampedusa’s The Leopard: “If we want things to stay as they are, things will have to change”. They could even end up demanding more progressive regulations from policymakers.

Earlier this month, it was reported that Sweden’s shipping sector is preparing to end the use of fossil fuels domestically by 2045. This follows recent claims from shipping giant Maersk that it is aiming for a zero co2 emission target by 2050 – followed by Engine manufacturer MAN Energy Solutions saying this is “technically possible”, but citing a 2030 as a target.

Stena Line, one of the largest ferry operators, has been experimenting with methanol and battery-powered propulsion. Iceland is due to get its first battery-powered car ferry. Back in October 2018, The Economist reported that “Wind-powered ships are making a comeback”.

All of this is a good thing – the sooner that shipping companies veer away from heavy fuel oil, the better. HFO is a dirty and polluting fossil fuel that powers ships throughout our seas and oceans – accounting for 80 percent of marine fuel used worldwide.

Around 75 percent of marine fuel currently carried in the Arctic is HFO; over half by vessels flagged to non-Arctic states – countries that have little if any connection to the Arctic.

Already banned in Antarctic waters and in the waters around Svalbard, HFO is also a greater source of harmful emissions of air pollutants, such as sulphur oxide, and particulate matter, including black carbon, than alternative fuels such as distillate fuel and liquefied natural gas (LNG).

When emitted and deposited on Arctic snow or ice, the climate warming effect of black carbon is up to five times more than when emitted at lower latitudes, such as in the tropics – just this week there’s been a spill of HFO in the Solomon Islands.

In addition, if HFO is spilled in cold polar waters, it emulsifies, proving almost impossible to clean up, and breaks down very slowly. A HFO spill would have long-term devastating effects on Arctic indigenous communities, livelihoods and the marine ecosystems they depend upon.

Banning it removes this problem – and any potential costs in doing must be handled at a policy level, without passing costs onto communities.

As the Arctic warms, the sea ice melts and opens up new shipping channels, larger cargo vessels, such as container ships carrying consumer goods could divert to Arctic waters in search of shorter journey times, as an alternative to the Suez Canal and the Straits of Malacca.

In September 2018, the first commercial container ship – owned by Maersk – crossed the Northern Sea Route, from Vladivostok to Bremerhaven.

While this crossing was something of an experiment – and Maersk maintained that it did not use HFO, a full commercial rollout of container ships crossing the Arctic would greatly increase the volumes of black carbon emitted in Arctic waters, as well as the risks of HFO spills.

As this week’s meeting opened in London, IMO Secretary-General Kitack Lim said that “with future vessel traffic in Arctic waters projected to rise, the associated risk of an accidental oil spill into Arctic waters may also increase. It is therefore imperative that the [IMO] takes robust action to reduce the risks to the Arctic marine environment associated with the use and carriage of heavy fuel oil as fuel by ships”.

Yet a couple of Arctic nations are fence-sitting on the HFO issue: Canada and Russia. Canada was initially enthusiastic – with Justin Trudeau’s government co-signing an agreement with the Obama Administration for a “phase-down” of the fuel from their respective Arctic waters in late 2016.

Since then, Canada has back-pedalled, and made much of its IMO proposal to assess the impact of such a ban on Arctic communities. What Canada has so far failed to mention its submissions to the IMO, is that there is widespread, well documented support from indigenous Arctic communities from Canada, the US and Greenland.

Russia has considered a ban on use of HFO in the Arctic as a “last resort”. However, one of the biggest users of HFO in the Arctic, Russian state-owned shipping company Sovcomflot has spoken openly about the need to move away from oil-based fuels, and marine bunker fuel supplier Gazpromneft expects to halt fuel oil use from 2025.

Significantly, in August 2018, Russian President Vladimir Putin and Finnish President Sauli Niinisto made a joint statement on the need to move to cleaner ships’ fuels in the Arctic.

The outcomes from this week’s IMO meeting will spawn no great headlines, no grand speeches from heads of state. IMO member states already agreed, back in April 2018, to move forward on an Arctic HFO ban, and recognized the need to reduce the impact in the Arctic of shipping’s black carbon emissions over five years ago.

But what happens this week is critical to addressing the threats to the Arctic, rather than just talking about them. Banning of the the world’s dirtiest fuel from what remains one of the Earth’s remaining pristine environments should be a no-brainer – hardly challenging when compared with the task of reversing climate change globally.

Banning HFO use in the Arctic is a quick and simple step in the right direction – alternative fuel options are available, and non-fossil fuel forms of propulsion are on the horizon. The global environment, and this planet’s climate is under severe pressure.

Real, positive change is required across the board, from everyone on the planet. Even with the new-found enthusiasm within the shipping industry, there is much work in negating the impact of shipping on our health, and the health of the planet. Ensuring the Arctic is protected from oil spills and black carbon pollution from heavy fuel is one these ways – it’s achievable, and within our grasp.

Dave Walsh is an advisor to the Clean Arctic Alliance, which campaigns for a ban on the use and carriage of heavy fuel from Arctic shipping.