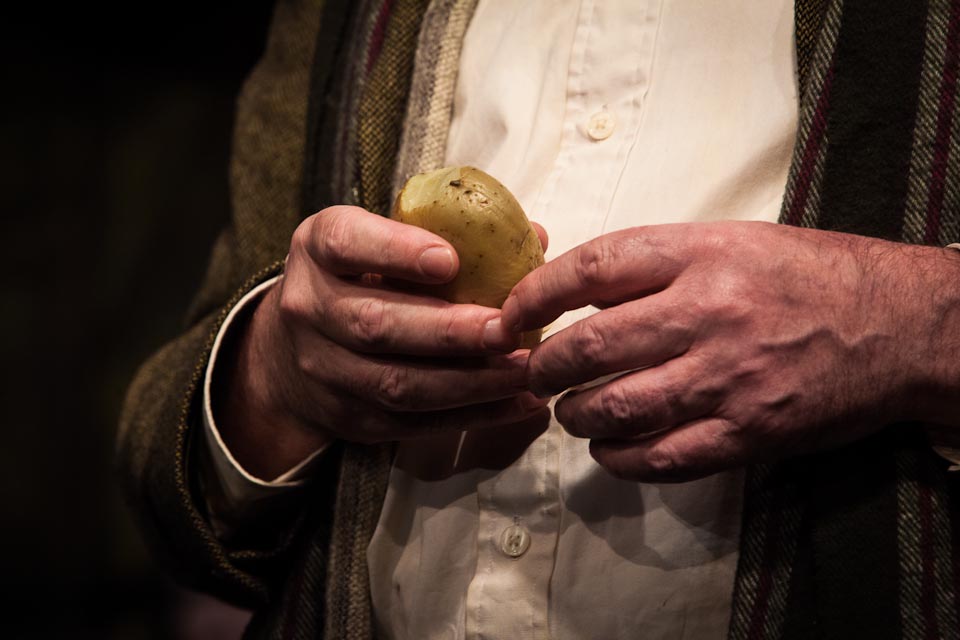 Performance of An Beal Bocht by Myles na gCopaleen by the Irish Theatre Group at the Warehouse Theatre in Brussels. Photos (c) Dave Walsh 2013, davewalshphoto.com

Ireland’s dear and glorious leader, Taoiseach Enda Kenny stood manfully astride the COP21 podium in Paris. Holding the lectern in a white-knuckled embrace, Enda rolled out Ireland’s comprehensive plan for taking global leadership on climate change, and he would personally corner Hollande, Obama, Merkel, Putin and Xi Jinping and the rest of them into finally saving the planet.

Enda had clearly been consulting the governmental ouija board while on the governmental jet to Paris, such was his close channelling of the spirit of his predecessor, Garrett Fitzgerald, on the powerful Diplomacy of Small States. In his speech…

Oh, to hell with it. I just made all of that up. Let’s start again.

Enda Kenny, Ireland’s Taoiseach (prime minister to the rest of you) in his speech at the COP21 climate change conference in Paris, said that Ireland was determined to play its part in dealing with global climate change, and, in line with EU commitments, to reduce greenhouse gas emissions by at least 40 per cent by 2030.

Then he got off the podium and went all off-message, telling The Irish Independent’s Paul Melia that Ireland had no intention of doing anything regarding CO2 emissions until at least 2020, until “the economy recovers” and that in the meantime “climate change is not our priority”. He added that Ireland’s current emission reduction targets are “unrealistic” and “unreachable”.

What? This is as depressing as it is embarrassing. Enda, Enda, Enda.

Then he opened his gob again, telling the Independent journalist how the country’s financial crash (still at COP21 mind) was the problem.

“We have lost a decade of investment in our country because of what happened. That cannot be recovered, and until we have an economic engine to allow us change structures, and continue to invest in research and innovation for more sustainable ways of doing agriculture, that presents us with a challenge. We don’t want to see a situation where we are limited in what we can produce to find that food is being produced in other countries with inferior standards and higher emissions levels”

Wait, so, what the Taoiseach saying here is:

Oisin Coghlan, of Friends of the Earth, confirmed Enda’s flip-flop:

“In the plenary hall the Taoiseach said ‘this requires action by everybody – big and small. Ireland is determined to play its part’. But then he effectively turned to the Irish media present, winked, and said to the audience back home ‘don’t worry, I didn’t mean it’.”

If there was ever evidence needed of Kenny’s position as the modern incarnation of the gombeen man, this could be it. Behind that wry, cute hoor smirk of his, I worry that there’s some reprehensible mixture of cynicism, hypocrisy, willful ignorance and cognitive dissonance locked into some weird internal battle. But there’s no excuse for playing the poor-little-Ireland-of-the-famine-and-IMF-bailout card – or if you like, playing the poor mouth.

Playing the Poor Mouth: to plead poverty as a defense or excuse (Mirriam Webster)

“There was no one in Ireland comparable to O’Sanassa in the excellence of his poverty; the amount of famine which was delineated in his person” – An Béal Bocht (The Poor Mouth), by Flann O’Brien/Myles na Gopaleen

Let’s look at all that again. The Taoiseach said that only in 2020, “when the economy recovers”, would poor little Ireland (13th richest in the world, by GDP) be in “a position to meet climate targets”. What the Taoiseach needs to do is flip this around, and instead consider what must be done with the global economy so that the planet’s atmosphere, land and oceans can recover from the emissions and pollution that we’re spewing out. As Coghlan points out, the only reason Ireland met its 2012 Kyoto commitments was because of the decline of emissions during the recession. There’s a clue there, Enda. Consuming less stuff means we can meet climate targets. This isn’t rocket science; it’s primary school science.

But no, the Taoiseach appears so blinded by the might of the Irish farming sector – and its self-enforcing belief in its intrinsic “sustainability” that he believe he can tell climate change to hang on five years, while he raises some cash from rearing more cattle.

But we’re not the small little insignificant country that Enda and his cohorts would have you believe. And while our milk production has the lowest carbon footprint in the EU, and beef production the fifth lowest, our agriculture is not so magically sustainable and bereft of emissions that we can simply expand it indefinitely. Ireland is the 8th most climate polluting country per person in the OECD. We may be small, but individually, we burn resources like there’s no tomorrow. Agriculture makes up 33% of our greenhouse gas emissions, the highest proportion of farming emissions of any EU member, thanks to our reliance on beef and dairy.

Tadhg O’Mahony, economist and senior researcher at the Finland Futures Research Centre explores this in his article Irish policy of promoting ‘efficient’ meat consumption is self-defeating, in The Irish Times of December 1st 2015:

“The narrative of the Irish argument on agriculture is that domestic beef and dairy production is more environmentally efficient than competitor countries and also promotes food security… The Irish case unravels when it becomes clear that the intention is to increase export and demand in new and existing markets. The bottom-line is that dairy, but most notably meat such as beef and sheep, are very carbon-intensive per calorie and per gram of protein. Consuming more environmentally efficient Irish meat is a false efficiency. By promoting higher consumption rates the problem is exacerbated and the efficiency becomes overwhelmed.”

“Simply ‘more production’ is discredited as a development option and there is a need to look at the entire food system. We need to look beyond this 20th century model at meeting multiple goals together, including climate change targets, environmental protection, public health, food security and resilient farmers’ livelihoods. [We need to look at] “moving away from growth in beef and dairy to seeking a more appropriate balance with cereals, fruit, vegetables and potentially beans as sources of protein, may prove a promising development model.”

“The impacts of inevitable changes in the Irish climate should be taken into account and greenhouse horticulture should be examined more. Outside of nutrition, forestry and re-wilding as a resource for biodiversity, timbre and tourism, and for the known benefits to public health and mental wellbeing, are other options.”

Enda Kenny, and the Irish government like many of us, are beholden to the lure of consumerism and of economic growth. We all follow these doctrines as if they were based on real, tangible science, based on some immutable truths, when no such thing exists.

A good, happy and healthy life is not guaranteed to the Irish, or any other people, by devotion to the gods of economic growth. It is my suspicion that there may be other ways to do things.

Kenny would do well to pay attention to that other great little country of 750,000 people, Bhutan, where the government keeps a national happiness index – testing all major plans against it before proceeding. But in contrast to Ireland, Bhutan made the most ambitious commitment at COP21 in Paris, according to the Energy & Climate Intelligence Unit.

Bhutan’s got clear plans to expand its forest cover, which already absorbs three times more CO2 than its population creates and covers 75% of the country. Last year, Bhutan set a world record by planting 50,000 trees in just one hour (by just 100 people!) and plans to keep some 60% of its forests “in perpetuity”.

In Ireland, we greet each other by saying “Howya!” – and rarely tell the truth in response. In Bhutan, they ask themselves “how are we doing, as a country, as a society” – and measure this, GNH instead of GDP.

GNH is a much richer objective than GDP or economic growth. In GNH, material well-being is important but it is also important to enjoy sufficient well-being in things like community, culture, governance, knowledge and wisdom, health, spirituality and psychological welfare, a balanced use of time, and harmony with the environment. – Gross National Happiness website

According to the index, 91% Bhutan’s citizens are “narrowly, extensively, or deeply” happy. The country does have some human rights issues (what country doesn’t?), and maybe this index isn’t all it’s cracked up to be – but at least they’re thinking more holistically about “how we are doing” then just counting euros or dollars. Bhutan realises that there’s more to life than profit and the bottom line, and they’re facing up to climate change.

Quit milking cows, Enda, and pay attention. You’re at the helm of a country of 4.5 million people. Imagine what we could achieve if our government showed real leadership on climate change – inspiring or shaming other countries into action with us.