Ireland, Climate Change and the Power of Small States 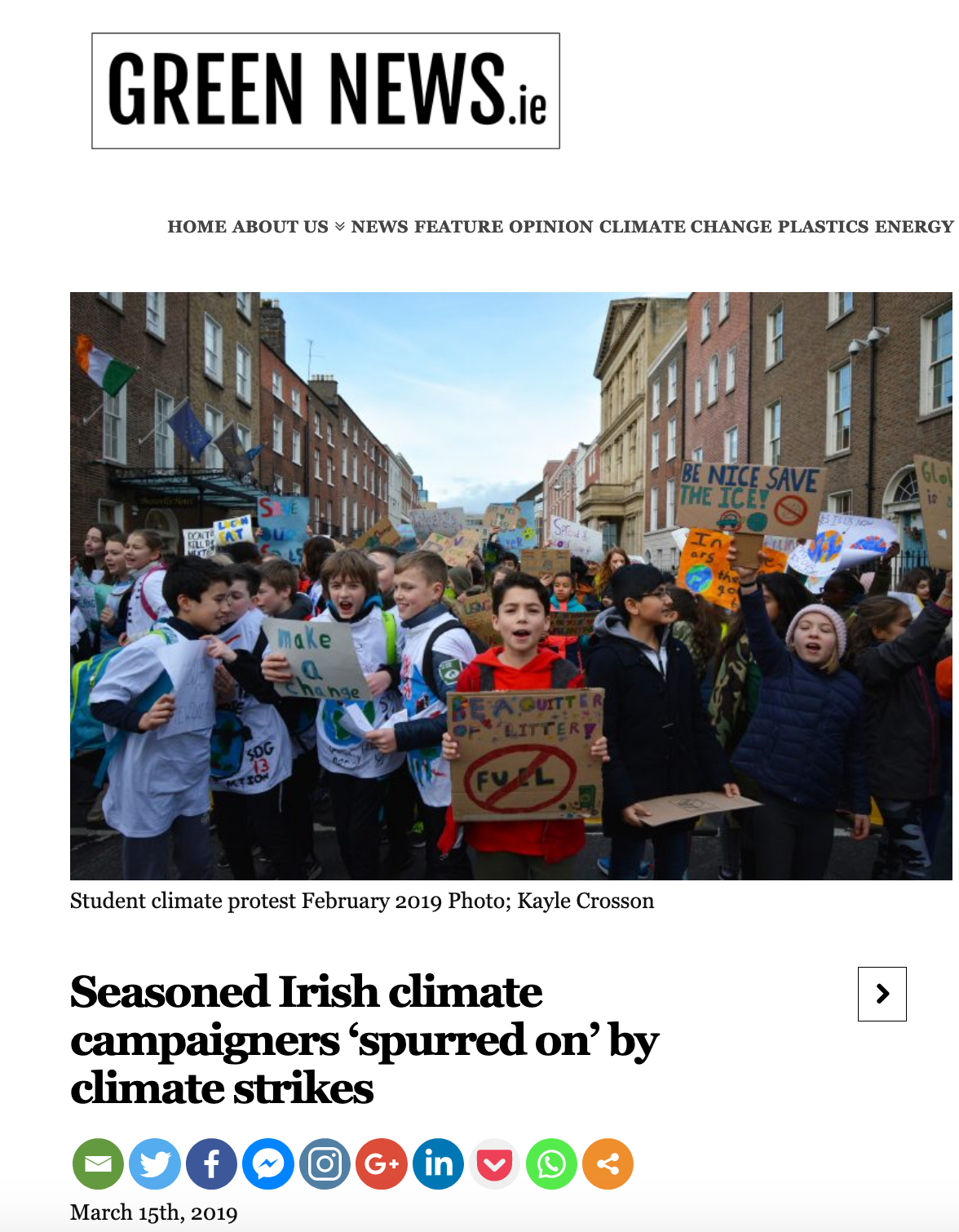 This article first appeared on The Green News, 15 March 2019, with the title “Seasoned Irish climate campaigners ‘spurred on’ by climate strikes”

Today, over 1,750 climate strikes will take place in some 110-odd countries – Ireland included – inspired by actions of one 16-year-old Swedish girl, Greta Thunberg.

This is the same Greta Thunberg who was recently vetoed by European political parties, EPP and ALDE, from giving a speech at the European Parliament. Fine Gael is a member of the EPP, and Fianna Fail a member of ALDE.

For those of us working on global environmental issues, Ireland’s political incoherency on climate change has been source of embarrassment. While other EU countries at least make political token efforts – and some cases take real action on climate, Ireland appears to be examining its fingernails in the hope it won’t be noticed.

Despite our national procrastination, it is been impressive to follow Ireland’s climate movement catapulting itself into the national agenda.

Following years of groundwork from seasoned climate campaigners and scientists, the findings of the Citizens Assembly, things are finally changing, spurred on by the weekly school climate strike and Extinction Rebellion movements.

Young climate campaigners are meeting with members of the Seanad, appearing on the Late Late Show and Met Éireann is now issuing internal guidelines on how to talk about extreme weather.

We’re moving fast. But while it’s imperative that we get our climate affairs in order at home, we have a duty, and a talent, for making a difference globally. Ireland punches above its weight worldwide on many issues – including in peacekeeping, disarmament and development. Why not climate? Maybe it’s our lack of political coherency at home.

Ireland has played the cute hoor – ‘ara sure we’re only small, what difference can we make’ –  card for far too long. Our argument on how our CO2 emissions from cattle farming have less impact than if the cattle were reared elsewhere has a certain logic to it – but to steal from Upton Sinclair, this only makes sense from the perspective of someone who’s salary depends on the production of beef or milk.

A quick search of YouTube turns up a video of former Taoiseach Garrett Fitzgerald during a trip to Malta in 2007, where he talks about the “clear advantage” that small countries have in “coherence of policy-making and policy implementation” over many large states. “Using that capacity,” he added, “you can sometimes achieve results disproportionate to your size.”

We not only have the duty to sort our domestic climate policies and responses, we have the potential to join forces with other small nations to drive the dramatic changes needed to achieve future peace, prosperity and wellbeing under the shadow of global climate change.

I am sure that Leo Varadkar is aware of the words of his predecessor: “The nature of small states is that they are more coherent in their decision-making. If you’re a small government, you can get the people together and decide what to do and do it.”

Taoiseach, we’re standing by. And if you’re not ready soon, we’re leaving without you.

Dave is an Irish campaigner, policy adviser and multimedia communicator based in Barcelona who has worked on campaigns concerned with the likes of climate, oceans and forest protection, international trade deals and polar scientific research. He also runs the Cold Reality website.