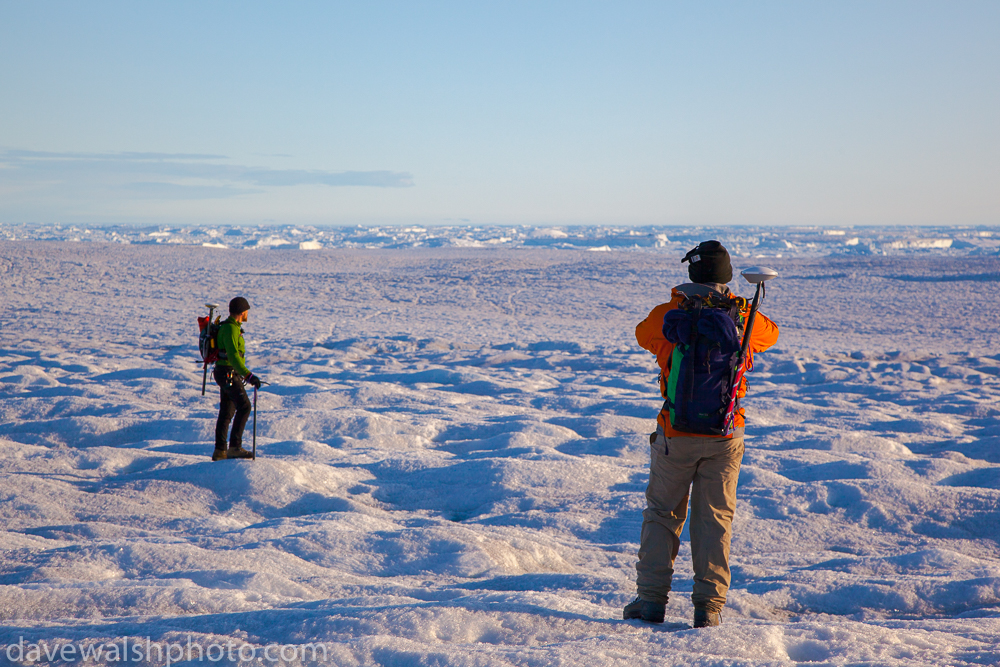 It’s one o’clock on a windless morning. I’m walking on Humboldt Glacier in the high Arctic of northwest Greenland, my ears filled with the clumping of my own boots on the ice. The sky above is bright blue, and the sun is low, flirting with the horizon. It will be another few weeks before it sets.

Ahead, the sun is beating down on my fellow hikers, Dr Alun Hubbard from Wales, and Dr Jason Box from the United States, as they stride across the glacier with GPS antennae protruding from their backpacks. I’m a little behind them; my backpack containing some pretty intense espresso and a pie baked by Babu, the Arctic Sunrise’s cook. Although it’s ‘night’, I’m so warm that I’m down to my base layer t-shirt, and the sunblock is starting to run under my sunglasses and sting my eyes. 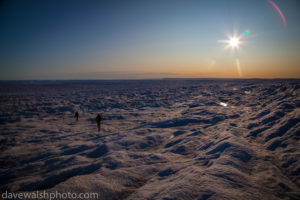 All around us is ice. Ice as far as the eye can see, to the north, south, and most definitely to the east, a lot more than I can conceive. Whenever we reach the top of a rise, I can see the massive icebergs calving from Humboldt Glacier into Kane Basin, the large body of water to the west. This is Humboldt’s main calving embayment, the most active part of the glacier, which we have nicknamed ‘Baby Cow Bay’. It’s the relatively fast flowing stream of ice that spits out the hundreds of tabular icebergs that we’ve seen from the Arctic Sunrise. We’re a couple of hundred metres above the water in Kane Basin, but below our feet is another kilometre or so of ice, squeezing the actual bedrock of Greenland down below sea level.

Crunch, crunch, leap… unlike the floating tongue of Petermann Glacier, which has a low elevation and consists of gentle rolling dunes of ice and thousands of curvaceous little melt lakes, Humboldt looks a lot like what people might expect of a glacier – big crevasses that lead to a calving face from which huge chunks of ice fall, or massive tabular icebergs break away.

Humboldt’s face – its end, where it meets with the open water of Kane Basin – is an incredible 110km long. Earlier, sitting in the helicopter as it lifted off from the deck of the Arctic Sunrise, I was gobsmacked to see the Humboldt’s vastness. It was my first flight over the glacier, and I was neither prepared nor able to take in its immensity. 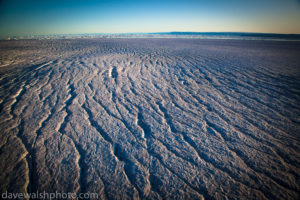 Together, Petermann, and Humboldt drain a full 10% of the Greenland Ice Sheet into the sea, the world’s second biggest ice sheet after Antarctica. At the moment, Humboldt is retreating, and has lost 175 square kilometres of ice since 2000. Petermann is poised to lose 100 square kilometres or more of ice, which will accelerate the glacier’s flow into the sea. Petermann and Humboldt are both known as ‘sleeping giants’ – climate change has yet to ‘awaken’ these glaciers in the same way that’s occurred in southeast and western Greenland.

According to Alun, a glaciologist based at Aberystwyth University, records from the last 10 years show that the glaciers are “potentially waking up, and waking up with a bit of a bang”.

For scientists like Alun, who are trying to understand the implications of climate change on glaciers, and the knock-on effects of their melting, it’s a constant game of catch-up as new information and greater understanding comes to light. Current worst-case scenarios of sea level rise have been upgraded to from 20-60cm to one to two metres by the end of the century, following the realisation that glacial flow affects the stability of the Greenland Ice Sheet and that submarine glacial melt takes place five to 20 times faster than melt at the surface. Exploring how these dynamics affect northwest Greenland’s sleeping giants is one of the many tasks that the science team on board on the Arctic Sunrise have been addressing at Petermann and Humboldt glaciers– and that’s why we’re up all night tonight, conducting a GPS survey of Humboldt on foot. 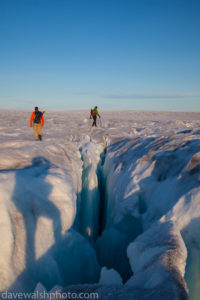 Navigating around a crevasse on Humboldt Glacier

At the beginning of our hike the going was pretty straightforward – we simply marched forward, jumping occasional small crack. Now we’re on a descent towards the glacier’s face, through crumpled ridges of ice. I get a sense that a glacier is much like an accordion or concertina, slowly opening and closing, compressing and releasing into these deep crevasses before healing again into solid ice.

The three of us are up here on the ice in the glare of night because, during helicopter reconnaissance flights in the last few days, Jason and Alun noticed suspicious slumps, or depressions, several kilometres inland in the glacier. To investigate these further, we decided to hike about 10km across the ice with GPS units, to map the topography of these bowl-like depressions. At night, it’s not quite as a hot and the ice is a lot less blinding.

I ask Jason and Alun about the significance of these depressions. They explain that due to the sheer weight of Greenland’s ice cap pushing the island down, glaciers like Humboldt and Petermann are actually grounded below sea level. This means that the bottoms of the glaciers slope downwards and inland from where they meet the sea.

While this is a new idea for me – I’d always assumed that glaciers went up uphill, this is a normal situation for Humboldt. What’s abnormal is the phenomena suggested by the depressions; it seems that the top of the glacier now also slopes inland, which suggests a potentially catastrophic weakness in its structure.

During one of a couple of coffee breaks, I ask Jason and Alun about the dip in the glacier’s topography where were are now standing – about 5 kilometres from the glacier face, and about its significance. given the fact that it’s slumping in the direction of the ice sheet, not the sea.

“When a glacier front has a reverse surface slope, that is, it’s sloping downward towards the inland ice, it’s a recipe for doom, Jason, a climatologist at Byrd Polar Research Centre at The Ohio State University, answers. “Where we’re standing may well be detached with in a few years”.

“It’s the same surface reverse slope that we’ve seen on other glaciers in Greenland shortly after having thinned. Presumably it’s thinned here to the point that it’s actually sloping upward in the last four kilometres to the sea, and on these other glaciers, this has the beginning of the end of that part of the glacier.” 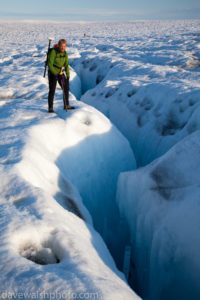 Jason Box on a crevasse on Humboldt Glacier, Greenland

“It’s really just a matter of time until Humboldt glacier retreats into the heart of the ice sheet.”

“And,” says Alun, “because much of this glacier is grounded below sea level, that makes it a potentially a real quick route for shifting that ice reservoir inland, to the sea. And that’s bad news”.

“Yeah,” Jason interjects, “it’s a fairly new epiphany, in the glaciological community that we have these marine terminating, submarine glacier fronts that remain submarine, that is, below sea level well inland. Actually, it’s below sea level all the way into the centre of the ice sheet. That retreat is ongoing, and it’s actually not something that’s happening in the future, it’s happening now.”

Alun again: “It’s happening now, and I think the point is that once you embark upon the retreat from a stable pinning point at the margin, at the outward margin of these troughs, you tend to see a pretty rapid eating away of that ice into the inland ice sheet. So even though it’s a gradual process, the way that it expresses itself in terms of the retreat is that it could be very rapid deglaciation.”

“I think what’s happening at Humboldt is that the retreat is being limited by the pileup of big ‘bergs that are still sitting at the front”, he continues. “Even though they’ve broken off, we see these big tabular ‘bergs still that are sitting at the front. These are limiting the effects of weathering and movement. They’re kind of creating a protective barrier at the moment, but with the very warm current that we’ve seen coming up Nares Strait, that could really help disintegrate, to promote the disintegration of those bergs and shift them away, and that’s when I think we’ve got to worry”.

Indeed, we do have to worry. If glaciers Humboldt and Petermann do wake up and starts dumping billions of tonnes more ice into the sea, sea level rise predictions will need to be re-adjusted once again. For the hundreds of millions of people living close to the sea right now, rethinking predictions may mean little right now, but they are the people who will be most hard hit.

World leaders attending this December’s climate meeting in Copenhagen have a responsibility to their people, and to the people of the world to stop humankind’s contribution to climate change, and at least mitigate its effects. There is no compromise; and there is no middle ground. Things are that bad, but that’s no excuse for not trying to do some good. Do our leaders have the courage to cut greenhouse gas emissions by at least 40% by 2020? We need to keep the pressure on. 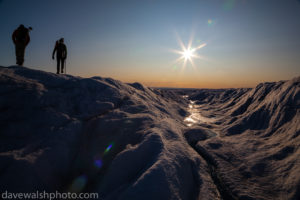 Back on Humboldt, by 3am, we’ve walked a lot, talked a lot, and probably had a lot more coffee and cake than is healthy. We would have happily negotiated another 10km of Humboldt Glacier, but we hear the thumping of the helicopter’s rotor blades over the horizon, as Martin comes to take us back to the Arctic Sunrise for some sleep.