Return of the Chinese Zombie Ships 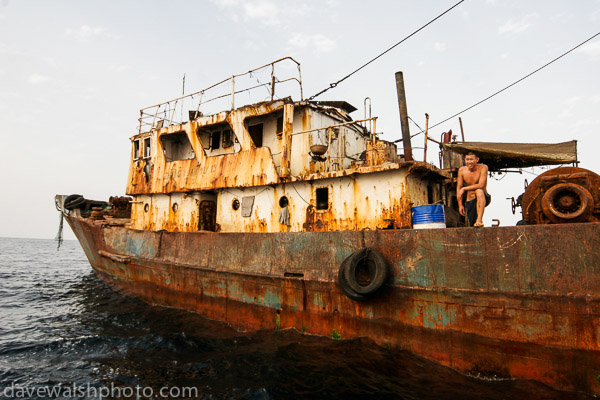 This article was first posted on the “Defending our Oceans” blog by Greenpeace on April 6th, 2006. That site has been retired, but here’s the original on the Internet Archive.

Last week, we told the story of the Chinese zombie ships of West Africa – this week we went back, and interviewed the men on board.

The Chinese fisherman clears his throat and gives a nervous glance to his right. “When I’m fishing I will be busy – it will be easy to forget”.

We’re standing on the deck of one the shattered ‘zombie ships’, theLian Run 16, anchored 120km from the coast of Guinea. 38-year-old Jia, a lean, hardy man with sad eyes and a ready smile, is telling us how, five days ago, he said goodbye to his wife and 11-year old son, Xinyi. The next time he sees them, his son will be 13. It’s easier to forget, it seems, than torture oneself.

After job losses in a coal plant in his native city of Dalian, Jia signed up for fishing through an agency. The Lian Run company flew him, his wife and his son all the way to Conakry in Guinea. Now he’s on his own, on board a decrepit ship that isn’t going anywhere.

Is this what he expected?

“No, I thought I would be going to a newer boat. I’ve very sad and disappointed.” However, he’s not too worried about the safety conditions, “as the ships used for fishing are much better “. Jia is confident that he won’t be here too long. He’s here to work as a deckhand, and earn 50,000 RNB a year – about USD$6200 or €5100.

A few days earlier, I heard we were going back to talk to the men on the ‘zombie ships’. I was unenthusiastic – perhaps, by already writing the blog about it, I’d gotten the sense of despair out of my system. Easy for me to do – not so simple for marooned seamen.

I climb from the bow of the jet boat onto and over the gunwale of the Zhang Yuan Yu 17, one of the ships roped together. On deck, shards of rust flutter onto my feet, and catch between my toes. I knock the soles of my sandals on the deck to clear them, and upset another lot of rust. I knew these ships were in a bad way, but actually touching, smelling the decay just brings it home.

The man standing before us on the deck is 30-year old Kun, from Dalian, in China. He’s been on board this ship for seven months. The engine doesn’t work, and the only other occupant is a depressed looking monkey that’s tied up with a piece of string. It sits in the cubicle of what used to be the ship’s toilet, idly scratching itself and picking at some lentils, or trying to catch flies. Kun tells us that they caught the monkey in Guinea, but can’t pick it up, as it bites.

Kun is 30, lean and fit, with a shock of black hair and couple of horrible puncture scars on his arms. He’s been out on the sea off Guinea for nearly two years, and says that he’ll be going home soon, either via Conakry airport, or by fishing boat to the Canaries. He’s has a child that he’s seen only twice, the last time was 2003. There’s a family connection to his being here – the manager of the Lian Run fleet, which has 40 boats, is a relation.

He’s the 1st mate of the Zhang Yuan Yu 17, and when it was anchored here, he was told he had to stay with it, it to look after it. Nobody wanted to be on this boat, but he’s here now. That was seven months ago – the fishing, he tell us, isn’t good now anyway, and hasn’t been good since then – presumambly due to the unfetttered trawling the pirate fleet. Kun was busy before, working on the fishing boats, making money. He only gets full wages if he’s fishing. He received no money until the end of his first year – then his family were paid, and when he finishes his contract, he will get the rest. Because he hasn’t fished for seven months, he’s not sure how much he’s owed. He does tell us that he can earn up to USD$1000 (€800) a month.

“Now time passes slowly”, he tells us, and the “worst thing is boredom”. He doesn’t cook here, he goes to the Lian Run 16 to eat – Kun is the man in last week’s photographs, pulling himself along on the rope, while standing on a tiny raft. He also plays cards with the others, and reads books.

Kun tell us that the entire zombie fleet leave tomorrow, and sail to Conakry for repairs. His own vessel, the Zhang Yuan Yu 17 has no power, so it will be towed. We find this hard to believe – firstly, the ships are utterly beyond ‘repair’ – and we doubt they have the wherewithal to make it to port, even considering the calm seas.

The confusion continues throughout the morning, as we talk to men on several of the ships – some of them say “yes, we’re are going to Conakry”, others look puzzled, and say “no, we’re all staying here!” Others point us off towards a trawler anchored in the distance, and tell us to ask ‘The Captain’.

It’s the Zhang Yuan Yu 1 – the rusting hulk we saw refuelling last week with a skeleton crew on board – despite Jia’s hopes, some of the working fishing boats aren’t much better than the anchored ones. The Zhang Yuan Yu 1 now has a full crew, including one man I’ve seen on another trawler. “The Captain’s asleep,” they tell us. The Captain must be a light sleeper – he runs out of the bridge, shouting, telling the crew to stop talking to us. We leave.

I don’t regret returning to the ship graveyard – if nothing else, we alleviated the boredom of the men sitting on a crock of a ship, waiting to either go home or go fishing. And I was, in a way, pleased to see that the men were making the most of their negligible resources – they had pots and pans, kept as clean as could be Some food had finally arrived – cabbage and other foodstuffs were hanging inside the accommodation of the Lian Run 16, bagged up in plastic to keep the hordes of flies at bay. The cabins were falling asunder, but they had done their best to create a home of sorts, and were keeping it as clean as possible.

On the bridge, the entire portside wall was a lacework of rust and fossilised timber, ready to collapse at any moment. Qiang, a cool-looking customer with long hair and glasses, is telling us that the engine works ok now, but the outside of the ship “needs repairs”. Again, this looks like wishful thinking – I’m amazed that the floor is holding our weight. The bridge itself has practically no equipment other than a binnacle and a control column for the engine. That’s it. Outside on deck, our feet crunch on rubble – the bridge deck and fo’c’s’le were once made of thin sheets of steel lined with concrete, and it’s now all over the place. On the winches, the bristles of former steel cables point out like spines, or merge together into one rusting mess. Parts of the hull have collapsed onto the deck, and are curled up like sardine-can lids. Words don’t do justice to the mess – Pierre’s photos are the true testament.

We’re still left with questions – will the ships go to Conakry, or stay put? And would a fishing company fly men halfway around the world to put them on a condemned ship? Why are the sailors told different stories by ‘The Captain’ about the ships leaving?

I’ll leave you with the image that stays with me – on the wall of Kun’s cabin, there’s a tear-off daily calendar, showing today’s date. Next to it are photographs of him with his wife. On one of the photographs, there’s two pen-written words in English, below the smiling young couple; “Endless Love”.

This article was first posted on the “Defending our Oceans” blog by Greenpeace in 2006. That site has been retired, but here’s the original on the Internet Archive.

The Environmental Justice Foundation: Oceans. The EJF continues to work on the issues of illegal fishing and labour issues in Africa.
Report – All At Sea: The Abuse of Human Rights Aboard Illegal Fishing Festivals